A family of groundhogs is preparing to hibernate for the winter when Grampie decides to hand over his February forecasting duties to one of the grandchildren. Gregory wins the task by drawing the longest straw. This decision made, everyone goes to sleep. But come February 2nd Gregory has lost his glasses and needs Greta’s help. The twins team up and the event goes off without a hitch.

This lively picture book about sibling rivalry and teamwork is beautifully illustrated and will capture the imagination of your pre-reader.

The Fifth Season is the first in  The Broken Earth trilogy.

“This is the way the world ends for the last time. It starts with the great red rift across the heart of the world’s sole continent, spewing ash that blots out the sun. It starts with death, with a murdered son 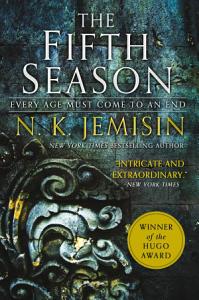 and a missing daughter. It starts with betrayal and long-dormant wounds rising up to fester. This is the Stillness, a land familiar with catastrophe, where the power of the earth is wielded as a weapon. And where there is no mercy.”

This work of fantasy begins with the narrative in the second person, which is a bit disconcerting at first because it is an unusual way to tell a story. The first 100 pages of the book have a lot of world building in them and it can be somewhat heavy and plodding but if you can work your way through this it is well worth the effort. Once I knew who was who and what the setting was it was difficult for me to put the book down. In fact, I read all three books of the trilogy in less than 3 weeks, which for me, is quite a feat.

The protagonist, a girl called Damaya, has been “given” to a guardian because she exhibits characteristics of earth bending which according to the rules of the Stillness, must be harnessed and controlled by those in charge. The narrative flips back and forth from Damaya’s view, told in the third person, and narrative told in the second person, which is actually Damaya as an adult.

The series is action packed and fast moving. It explores the issues of mind control, alienation and subjugation of fringe groups, trust and betrayal, love and loss. The characters are deep and it is easy to identify with each one. All show tremendous growth throughout the series and it is difficult not to be invested in their lives.

For all you fantasy readers this trilogy is a must.

city of Venice , to find the missing Aunt of one of Mary’s friends.   By using descriptions of the buildings , canals, cabarets, government agencies & daily life in this lovely city , it brings  this detecting  duo to life. With the mention of figures in history like Cole Porter & Mussolini, the story progresses  with great interest & excitement.
I enjoyed this book immensely.  I love books that take place in Italy. The added history & historical facts seem to be accurate , thus making the story believable.
Review by Romalda

The Silence of the North by Olive A. Fredrickson

In this biography we learn what life was like in 1920 in the harsh north lands of Alberta. At the age of nineteen Olive Fredrickson married a trapper and followed him into the wilds  where they led a

lonely and perilous life. They survived near-starvation, winter life in a primitive cabin with a tiny baby as well as a terrifying trek in 50 below zero weather.

Nine years later Olive’s husband died, leaving her as sole support of three small children. Without family or friends to sustain her, she single-handedly ran a farm, fed and clothed her children and protected them from the menace of wild animals.

This true story is told in very simple language in the first person, past tense. The story flows naturally and easily. I was gripped by the adventures of this woman’s every day life and found it difficult to put the book down.

The Silence of the North is just one book from our small but mighty biography section here at the Lanark Highlands Public Library. Come on in and check it out. You won’t be disappointed.