The Hanged Man by Gary Inbinder

The Hanged Man is a murder mystery set in  Paris at the end of the 1800’s.

“Achille Lefebvre and his wife Adele are planning to enjoy a stay at a seaside resort…until a body found hanging from a bridge in a public park demands the Inspector’s attention.

Is it suicide or murder?

A twisted tale of evidence draws Inspector Lefebvre into a shadowy underworld of international intrigue, espionage, and terrorism. Time is of the essence, pressure mounts on the police to get results. Achille’s chief orders him to work with his former partner, Inspector Rousseau, now in charge of a special unit in the newly formed political brigade. But can Achille trust the detective who let him down on another case?

Inspector Lefebvre uses innovative forensics and a network of police spies to uncover a secret alliance, a scheme involving the sale of a cutting-edge high explosives, and an assassination plot that threatens to ignite a world war.”

Inbinder tells his story in an omniscient narrative voice. He has done his historical research for the story involving Russian spies in France, threats of revolution and the newly discovered forensics of fingerprinting.

I found his dialogues stilted and unrealistic. On the plus side, he does attempt to inject his work with interesting vocabulary. He has obviously used a thesaurus to create variety, and kudos to him for that, but unfortunately his knowledge of nuance is lacking, thus making his choice of words, though technically correct, unsuited to the context in which he uses them. This in turn causes his already stiff narrative to have a jarring quality.

Though he sets up the discovery of clues as per the mystery novel formula, his foreshadowing is heavy handed and clumsy. Equally awkward is his attempt at portraying the marital relationship.

Having said all that, the Inspector does get his man and all’s well that ends well.

Sorry Mr. Inbinder, but I am unable to give you more than two stars for this short novel.

The Graveyard Book by Neil Gaiman

“Nobody Owens, known to his friends as Bod, is a normal boy.

He would be completely normal if he didn’t live in a sprawling graveyard, being raised and educated by ghosts, 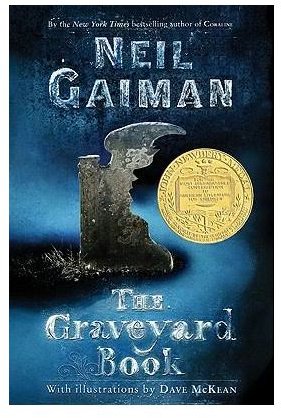 with a solitary guardian who belongs to neither the world of the living nor of the dead.

There are dangers and adventures in the graveyard for a boy…an ancient Indigo Man beneath the hill, a gateway to a desert leading to an abandoned city of ghouls, the strange and terrible menace of the Sleer.

But if Bod leaves the graveyard, then he will come under attack from the man Jack who has already killed Bod’s family…”

In typical Neil Gaiman style this is a delightfully strange and captivating story. His writing kind of reminds me of Steven King but this story is definitely geared to middle grade readers (ages 10 – 13)

The novel is illustrated by Dave McKean with unique black and white drawings to enhance all the creepy details that kids will love. If you’re okay with introducing your pre-teen readers to otherworldly writing this is a good place to begin.

Ali Smith is a writer of note. Her unique style and penchant for playing with words makes for interesting reading. It took me awhile to get used to the rhythm of her prose.

Autumn is divided into two parts. It wasn’t until I reached the first few pages of the second part that the first made any kind of sense to me. I went back and re-read part one and then enjoyed the book much more than I had to that point.

The point of view, third person limited, gives a good look at the two main characters, Daniel and Elisabeth. The use of flashbacks can be a little confusing at times but with careful reading becomes clear.

There is much to think about in the book and we find out that this is the main role of Daniel in Elisabeth’s life; to make her think. She learns to think outside of the societal norms and reach deep inside to intelligently make sense of her world. Autumn is a story of love and loss and how to deal with both.

It was really, quite a lot of work to read this novel but definitely worth the effort.

A Circus Adventure: a Tumtum & Nutmeg story by Emily Bearn

A Circus Adventure is number 5 in the Tumtum & Nutmeg series, the tales and adventures of two helpful mice.

“When General Marchmouse takes Arthur’s toy bus for an adventure he gets a big surprise. A circus has come to town! But there’s more to this traveling troupe than meets the eye…”

These books are printed in large type, spaciously arranged on the page with numerous pen and ink illustrations of the characters and their antics.

The language and action are well suited to young readers 7 to 9 years of age. Some of the vocabulary will stretch your young reader and working their way through the story will give them a real sense of accomplishment as well as providing a pleasurable read.